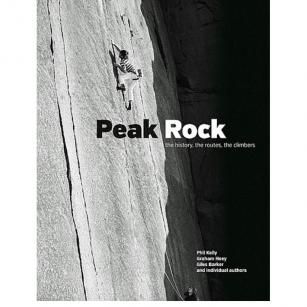 PRICE CHALLENGE! We strive to offer a contemporary product selection at competitive prices. If you've seen this product at a more competitive price then please challenge us and we'll see if we can match it.

Peak Rock is a celebration of significant developments at the cutting edge of rock climbing in the Peak District, from the day that James W Puttrell first set foot on rock at Wharncliffe in the late nineteenth century, through to modern day ascents on the area's gritstone and limestone crags.

The late Giles Barker first started work on Peak Rock - then titled Peak Performance - in the early 1980s, before progress was halted by his premature death in 1992. It was almost twenty years before Phil Kelly picked up where Giles left off, pulling together Giles' original research and interviews, which were stored at the Mountain Heritage Trust. Phil enlisted Graham Hoey to work on the book, updating the manuscript with their own interview material and other primary source information, writing a number of missing chapters and also adding a number of chapters, including the significant developments of the 1980s, 1990s and 2000s.

Phil and Graham brought in a team of experienced Peak District climbers drawing on their knowledge of specific developments - trad climbing, sport climbing, bouldering, gritstone, limestone - and worked with them to develop individual chapters. This resulting book on the history of Peak District climbing is the most comprehensive to be published since Eric Byne and Geoff Sutton's High Peak in 1966.

Phil Kelly's first experience of climbing was to be top-roped up the descent route at Lancashire's Deeply Vale aged 10. He returned to climbing in 1979 and spent the following 10 years as one of the leading activists across the Lancashire quarries, making a number of first and early repeat ascents across the county. While he has climbed rarely since 1990, he is active in maintaining an accurate history of rock climbing in Lancashire and the Peak District, and set up the RockArchivist web site to make this information publicly available.

Graham Hoey has been climbing for 40 years and is passionate about gritstone and the history and development of climbing. Graham cut his teeth on extreme routes throughout the country, leading traditional routes on-sight up to E6 since 1984. He was a member of Sheffield University Mountaineering Club for six years during which he became a good friend of Giles Barker. The completion and publication of Giles' book has been a long-standing desire. Graham has spent over 30 years working on climbing guidebooks to the Peak District and for 20 years was a member of the BMC Guidebook Committee.

Giles Ellis Barker was born in Hathersage in 1956. He studied archaeology at Sheffield University and served as its President of the Sheffield University Mountaineering Club. While a member he achieved several first ascents and made strong connections with other local climbers. While working as a teacher at Lady Manners School in Bakewell, Giles decided to write a history of climbing in the Peak District. The papers and audio recordings which survive are the research material for this project. Giles later concentrated on cave exploration and caving photography. Tragically Giles Barker died on 10 August 1992, aged 36, while exploring the Torca de Azpilicueta cave in the Matienzo system in Spain.

We only sell from our stock which is ready to ship, all orders are treated as Priority and get the fastest delivery to the destination. In the UK this means next working day for orders received by noon.

Estimated 3 to 10 working days for delivery

Please remember that your order requires a signature on delivery. Saturday, Sunday and Bank Holiday’s are not carrier working days. We cannot ship to Norway and Switzerland as these are not within our delivery zones.

Be the first to write a review

Winter's almost over
Spring is on its way.
The days are getting longer,
Whether this means warmer weather
Is impossible to say.

What adventures have you got planned this spring?

February weather can be harsh but with the right kit you can be warm and comfortable no matter what the mountains throw at you. So whether you’re heading to the mountains with family, friends or going solo have a great time outdoors this February with Countryside Ski & Climb.